On April 16th, 2021, the China-Italy Chamber of Commerce (CICC) organized, together with the Embassy of Italy in Beijing and ITA - Italian Trade Agency, the conference “Italy-China: Energy Transition - Towards a Sustainable Development”.

The event, organized in conjunction with the Fourth Edition of Day of Italian Research in the World and in the framework of the Italian co-presidency of COP26, was held both online and offline at the Rosewood Hotel Beijing. 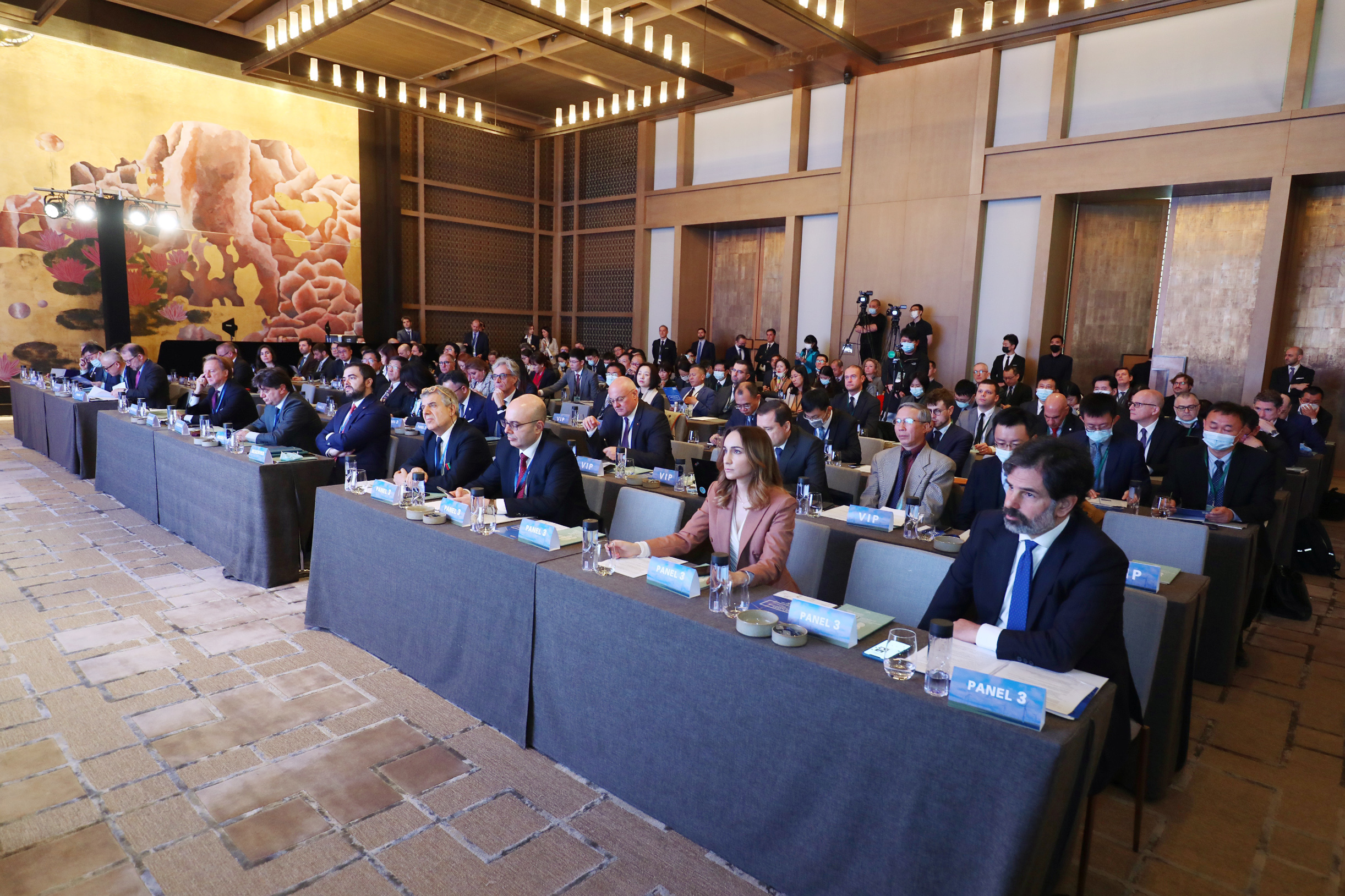 About 300 people participated online or offline, including eminent representatives of the Italian, Chinese and international institutions. Noteworthy is the speech of the Executive Director of International Energy Agency, Fatih Birol (video message).

The conference opened with the greetings of the Ambassador of Italy to the People’s Republic of China, HE Luca Ferrari; then followed, for the Italian part, the video messages of Italian Minister of Ecological Transition, Roberto Cingolani, and the Director General of International Renewable Energy Agency, Francesco La Camera; the final remarks were given by the Trade Commissioner of ITA for China and Mongolia, Gianpaolo Bruno, and the Chairman of China-Italy Chamber of Commerce, Paolo Bazzoni; for the Chinese part, there was the Director of National Energy Administration Zhang Jianhua (video message). 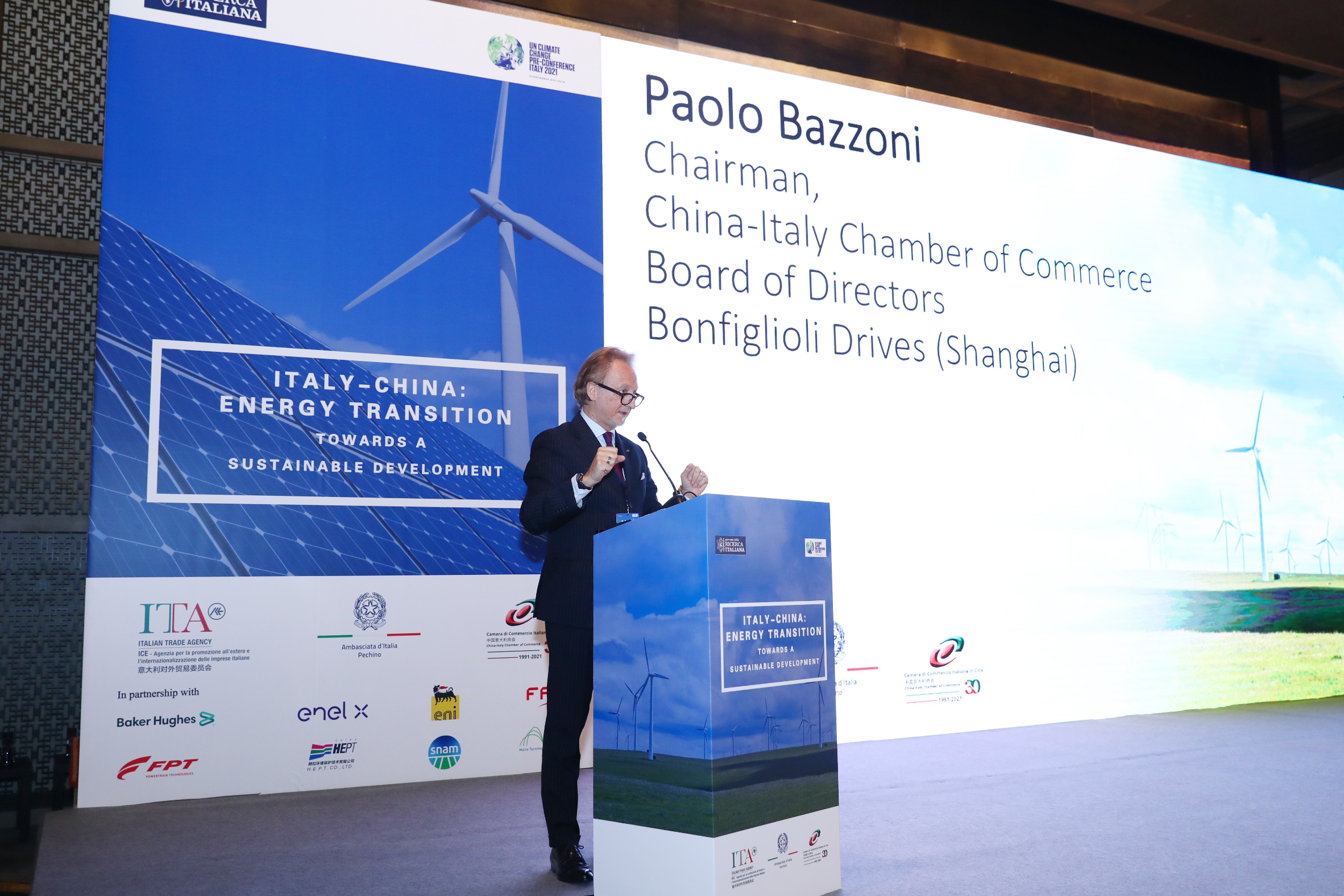 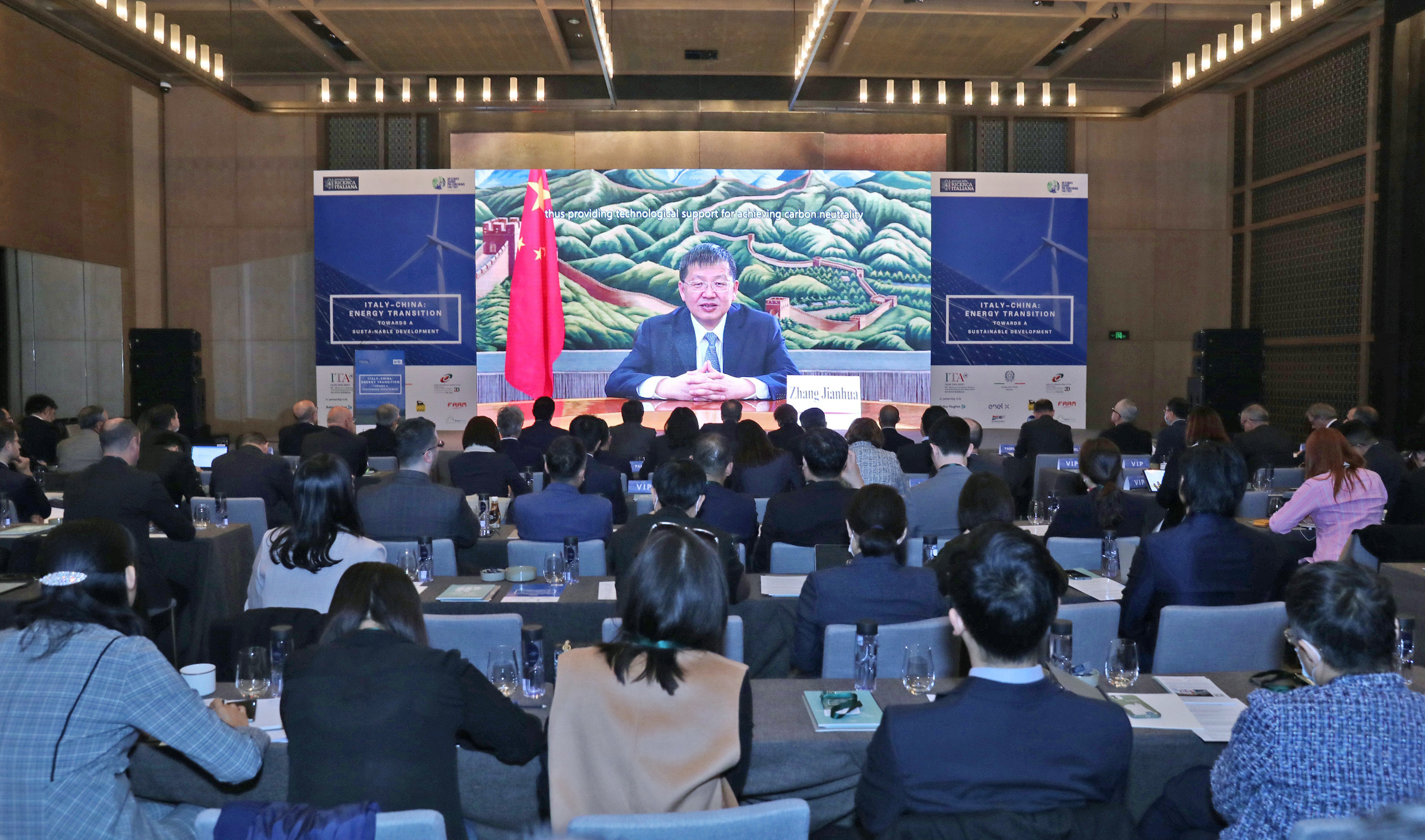 There was also an enthusiastic participation by the most important enterprises of Sino-Italian business community which, together with academics of both countries, discussed on the theme of energy transition.

The representatives of the most authoritative Italian & Chinese media also joined the event.

The conference was structured in three thematic panels:

“Ideas on Energy Transition: a New Life for Traditional Fuels?” Abstract: As it is known, the theme of decarbonization is rather complex. Pathway towards decarbonization has to be paved with a multitude of perspectives, approaches, solutions, new economic and social models, all of them combined through holistic, systemic and comprehensive approaches taking into consideration mainly and firstly the major contributor to worldwide carbonization, including fossil fuels, with no ideological bias.

Decarbonizing will mean radically restructuring primary energy sources. In 2019 over 50% of world primary energy was represented by Oil & Gas while Coal share was more than 30%.

It is important to note that Oil & Gas as well as fossil fuels will continue to play a role in the energy transition which will result in a Europe with no climatic impact within 2050 and one “carbon neutral” China within 2060.

In this context, the participants discussed how to accelerate fossil fuels abandoning, while, reducing their emissions impact along the energy values chains with innovative technologies; how to replace fossil fuels with-non fossil fuels through focusing on biorefining; how to differentiate fossil fuel contribution to the decarbonization path; how to balance decarbonization and other priorities such as food security; as well as other related issues. In front of these and other questions, the Chairman of Eni China BV & Executive Vice President of Eni China Representative Office Gianni di Giovanni; the President of Baker Hughes China and Vice President of Baker Hughes, Cao Yang; the Project Manager of New Energy Research Center of CNOOC Research Institute, Cui Dechun; and professor of Shanghai JiaoTong University Yan Zheng tried to give answers. The debate was moderated by Guido D. Giacconi, Co-founder and Chairman of In3act Business Investment Consulting. Soon after, there was the presentation of a publication realized by the Symbola Foundation in cooperation with Assocamerestero and Unioncamere, with the sponsorship of the Italian Ministry of Foreign Affairs and International Cooperation. The speaker was the Secretary General of Assocamerestero, Domenico Mauriello (video message). 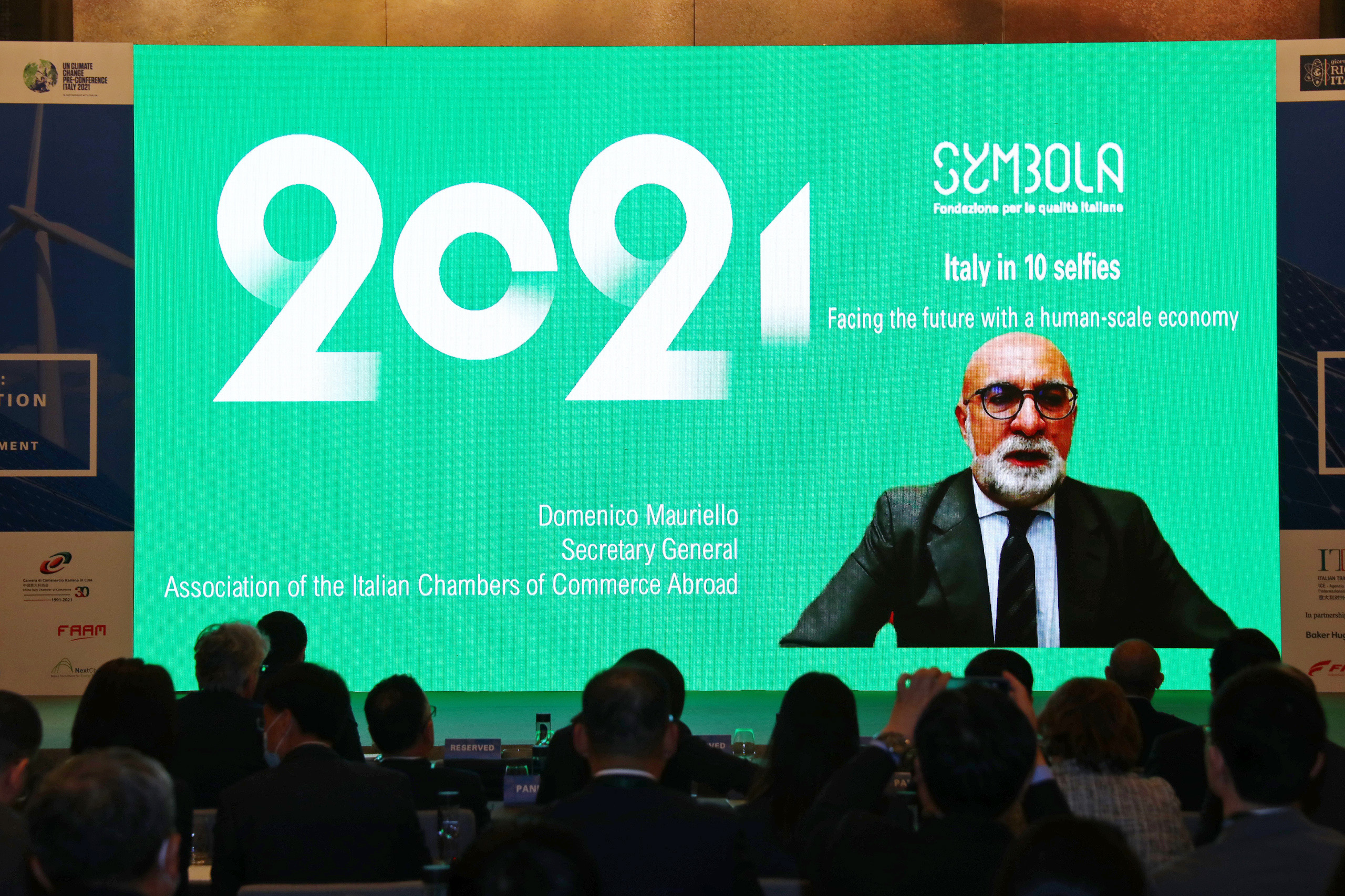 “Innovative Projects for Decarbonization: the Future Ahead” Abstract: More and more countries and companies pursue the “Carbon neutrality”, a target which might be achieved through reduction of fossil fuel consumption and GHG emission, as well as, by increasing energy efficiency and introducing low carbon technologies.

All relevant industrial sectors are involved in this effort. For example, transportation and mobility are proceeding in adopting new energy sources; industrial processes are more and more introducing concepts of circular economy and agriculture, getting smarter, is reducing the usage of chemical fertilizers and pesticides while increasing efficiency and productivity.

On the other side, policymakers are requested to create a legal and fiscal framework supporting the progressive achievement of the targets set for carbon neutrality. In this context, of paramount importance are the supporting measures put in place to develop new and low carbon technologies; also relevant will be reaching agreement, at global level, on standards to measure the efficiency of the supporting measures and, not least, dealing with the fair access to natural resources enabling renewable power generation.

To share their experiences and foreshadow the future challenges, there were the Chief Executive Officer of FAAM China, Ermanno Vitali; the Chief Representative of Maire Tecnimont, Cai Cristina; the China General Manager of Fiat Powertrain Technology, Zhang Zhiqian; Sun Xiansheng, of China Council for International Investment Promotion; and Zha Daojiong, professor of International Political Economy at the School of International Studies, Peking University. The debate was moderated by Lorenzo Gonzo, Scientific Attaché of Consulate General of Italy in Chongqing. Abstract: Smart city and digital infrastructure investments are addressed to make China one of the worldwide most advanced  country for the level of digitalization and IT density. The pandemic shock has produced such a scale-up of so many technologies, processes, ways of working, learning, teaching, traveling and not traveling, that will make the “new
normal” to become a “new diversity”. Are we only at the beginning of a change in lifestyle and consumer trends?
Maybe nothing will be the same as before. It will simply be "different". However, what is a smart city in reality? Is it a city with more digital and IT density, ot it is something more? Definitely it is something more.

The third panel explored the role of energy for a smart city. Energy is one of the dimensions of a smart city, perhaps the most difficult and challenging to deal with. Surely a smart city of the future must be a sustainable and low-energy city. But how to achieve this? And how to understand the “new paradigm” which has emerged with the pandemic crisis? In front of these and other questions, there were the China Chief Representative Officer of ENEL, Salvatore Miranti; General Manager of HEPT, Shen Jie; General Manager of Stefano Boeri Architetti China, Xu Yibo; and Yan Da, professor at Tsinghua University (Department of building science and technology). The debate was moderated by Roberto Pagani, Scientific Attaché of Consulate General of Italy in Shanghai.

The meeting was closed by the Ambassador of Italy to the People’s Republic of China, HE Luca Ferrari. The event was hosted by the Minister Counselor and Head of the Economic & Commercial Office of Embassy of Italy in Beijing, Emanuele de Maigret, and the Secretary General of China-Italy Chamber of Commerce, Giulia Gallarati. 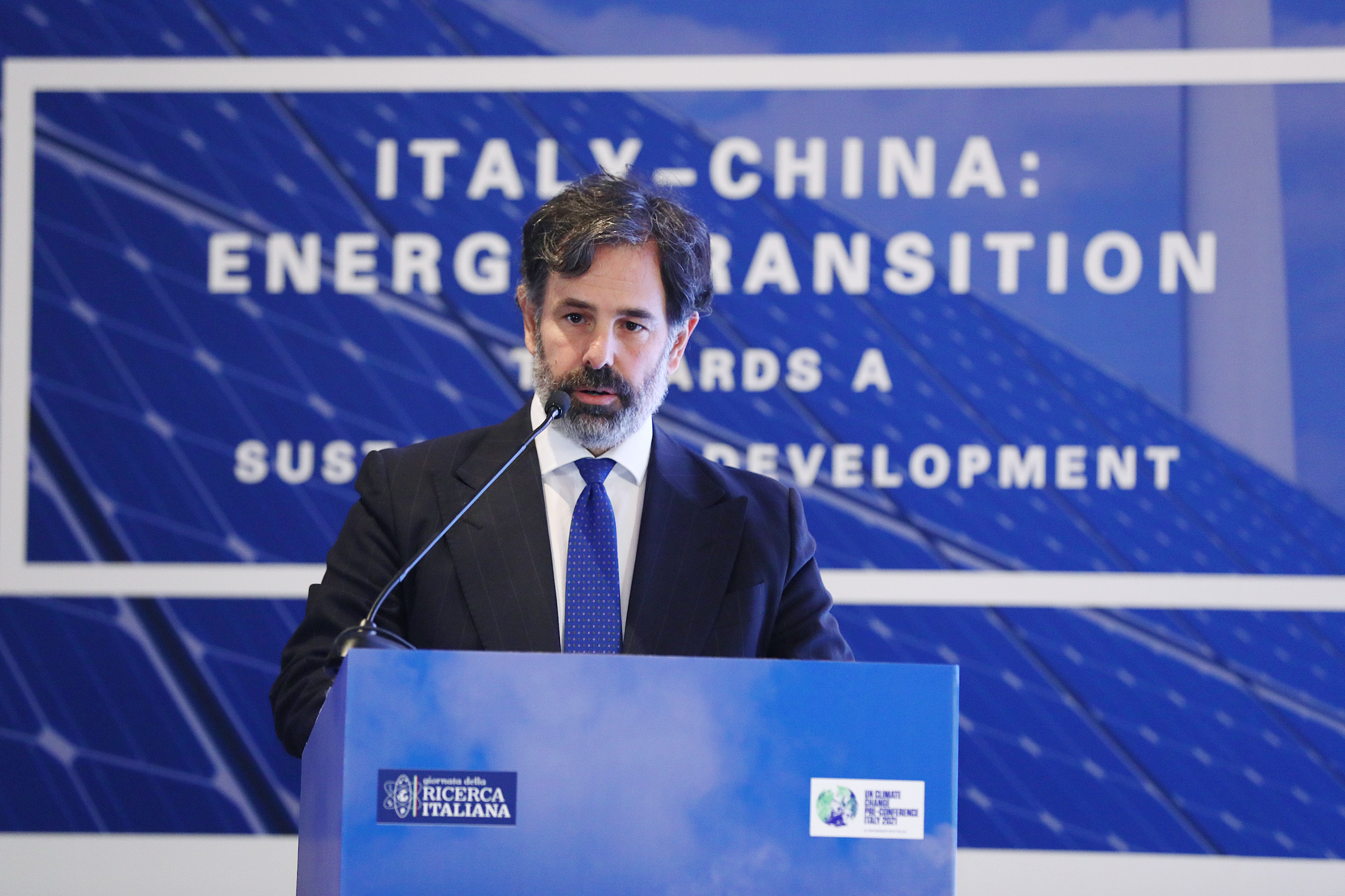 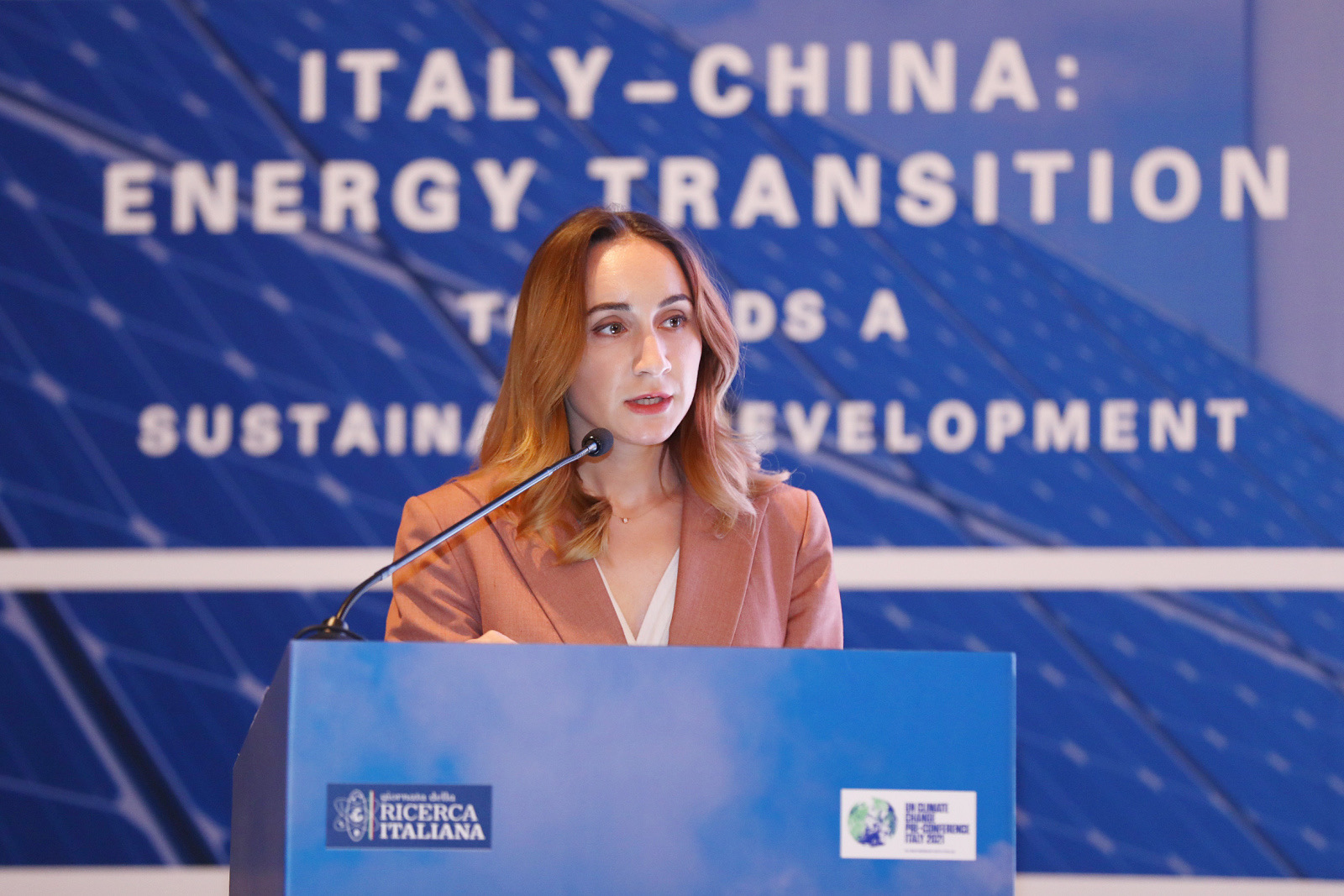