Giving to all the CICC Members an inside eye from the operators & forwarders point of view.

For ALL inbound cargo directly destined to Beijing/Zhengzhou/Tianjin airports, customs require disinfection. For cargo transiting via such airports, no disinfection is required.

CHINA Customs inspectors are taking three times as long to test meat, seafood and other imports for Covid-19, at some major Chinese ports. The intensive testing, coupled with large arrivals of cold storage food, have resulted in congestion at some ports and buyers not willing to import anymore.

The attempt to increase the rates further as of July failed but still rates remain at a high level and will be extended by most carriers until end August. Expected that some of the carriers will start to lower and/or even waive their PSS charges going forward, rates will slightly drop in September.
The equipment situation at German hinterland depots has eased , some carriers such as YML and/or Evergreen are even open to accept reefers again. Still many ports overseas are congested due to the effect of Covid-19.

After carriers did announce the will to balance the capacity with the dropping volumes, we now see a slight turnaround.
Due to rising demand Asia to Europe, Hapag/THE Alliance will sail a 4 weeks extra loader program with the FE4 service in week 30-33. These sailings turn back from Europe 4-5 weeks later, i.e. in week 34-37.
The FE2 will continue to run via Cape of Good Hope on her eastbound routing, whereby the FE3 will extend direct calls at Central China port from July to September

Market faced with several blank sailing from Europe to Asia, whereby mainly IPBC/Middle East destinations are now impacted. The Far East situation is starting to ease, even if space to some destinations such as Taiwan, is still limited for the next 3-4 weeks.
Looking on below overview we clearly see far less void sailings going forward, compared to the last 3 month. Overall the announced blank sailing in the Asia-Europe Trade for the period April to August do mount up to 94 (!!) sailings.
The next wave of blank sailing is expected for Q4 2020, whereby details are not known yet. 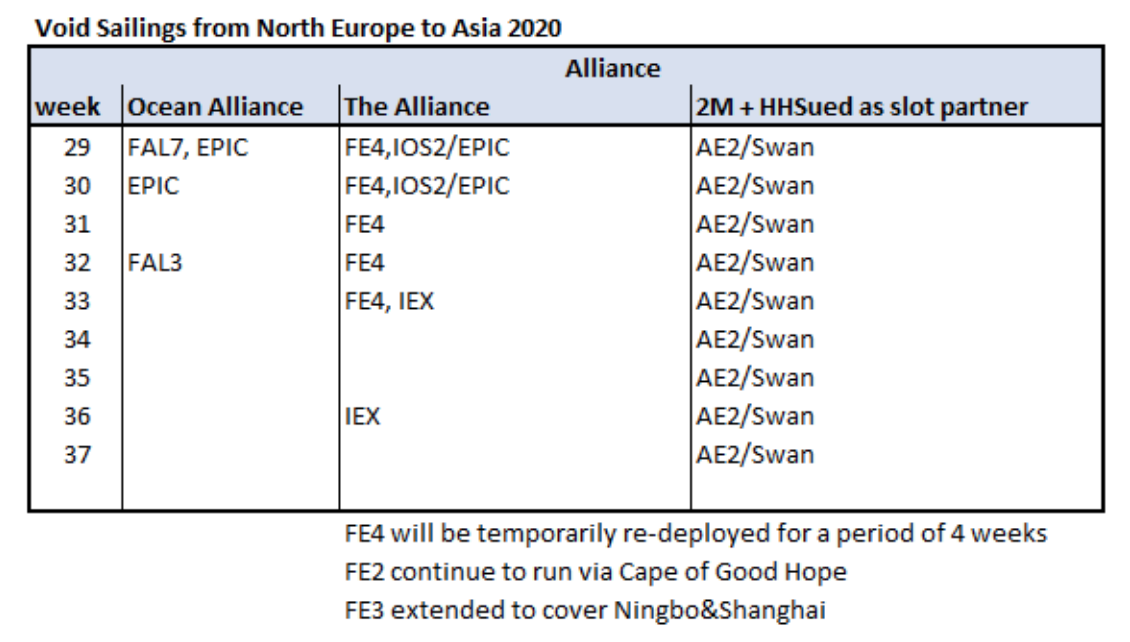 The latest figure from TAC index shows that airfreight rates from Shanghai to Europe slipped by 2.43 per cent week on week to USD 3.21 per kg.

According the Hong Kong Shipping Gazette, SPOT rates for shipping containers from Asia to northern Europe in the week ending last Friday edged up 1.9 per cent to US$920 per TEU.

For Mediterranean ports, rates fell 2 per cent to $951 per TEU, according to the Shanghai Containerized Freight Index (SCFI).

Capacity bottlenecks continue to occur on the route to India, due to persistent ship cancellations. There are considerable delays in the transshipment port Port Kelang in the direction of Australia. A backwater/roll pool of approx. 3,000 TEU is assumed.

The transit route between China and Europe is still experiencing delays after the heavy rainfall the previous week. At the most important border crossing between China and Kazakhstan, near Alashankou-Khorgos, trains are jammed. Due to reconstruction work on the line, high waiting times for all rail freight to and from China are expected to continue.

Overall, China's economy continued to recover in June 2020, after the corona crisis in the country eased further despite some relapses. This is according to a report in the South China Morning Post. The upturn affects both the manufacturing and service sectors.

The official Manufacturing Purchasing Managers' Index (PMI) was 50.9 in June, with a value of over 50.0 indicating growth in factory production.

The Indian subcontinent is still severely affected by the corona crisis. The number of infected people is rising, with more than half a million cases currently registered. The crisis has also had a noticeable impact on the transports running through India. The import containers from China are currently piling up in Indian ports, and the Indian government is taking its time until they are released.

For more information about the Logistic Working Group click here.