Giving to all the CICC members an inside eye from the operators & forwarders point of view.

With significant congestion and delays in the Transpacific corridor, plus a fully employed containership fleet, THE Alliance of Hapag-Lloyd, HMM, ONE and Yang Ming will implement a recovery plan to get their ships back into position. Consequently, in February, some services will drop one or more sailings. Most roundtrips will be cancelled before, during or after the Chinese New Year period (starting 12 February). Altogether, six sailings will be suspended to the Pacific North West, eleven to the Pacific South West and two the US East Coast.

During the Chinese New Year period, 2M (Maersk and MSC) intends to omit three sailings between the Far East and North Europe. The consortium will drop one roundtrip on the AE55/Griffin service and two on the AE5/Albatross service.

According to preliminary figures, in 2020, Hapag-Lloyd posted an EBITDA (Earnings before Interest, Taxes, Depreciation and Amortization) of EUR 2.7 billion, which is 40% more than in 2019. This is on the back of a turnover of EUR 12.8 billion (USD 14.6 billion), which is only 1.5% higher than in the previous year.

IATA reported that a year-on-year decrease in air cargo demand, measured in cargo tonne-km (CTKs), of 10.6% — which is the largest year-on-year drop since its records began.

The lack of airfreight capacity last year was caused by bellyhold capacity being reduced since most of the passenger services were stopped. Although carriers managed to find solution to increase the capacity by ramping up freighter operations and making use of preighters, it was not possible to fully compensate the lack of belly capacity which led to increased fares peaked in April and May, and spiked again in traditional peak season towards the end of the year.

Below you can find year-on-year regional performances of airlines in terms of demand and capacity for 2020 according to IATA reports.

Looking at regional performances in December;

Below figures from the World ACD, show that from key markets, belly capacity decreased by an average of 51% year on year in 2020, while freighter capacity was up by 6%, on the other hand rates increasing by 66% for general cargo, 46% for special cargo and 43% for express cargo. 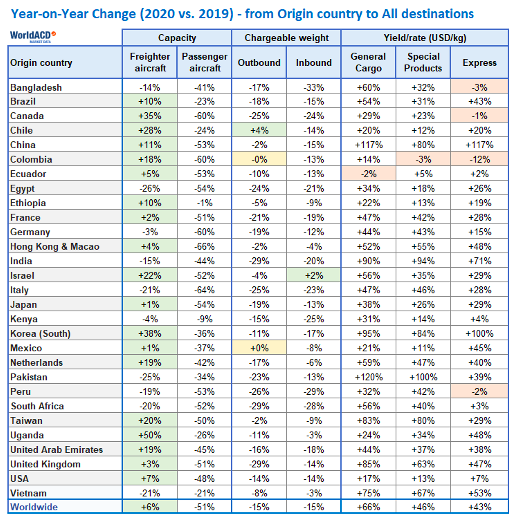